Why are Muslims always so angry?

The mob of several thousand people torched temples in Cox’s Bazar district, 350 km southeast of Dhaka, before dawn after learning about the posting by a presumed Buddhist, said Mohammad Zainul Bari, chief administrator of the district. 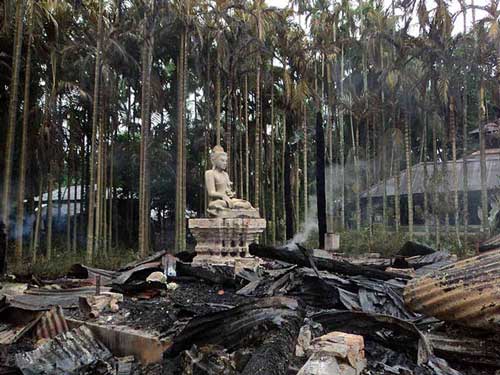 
The man accused of posting the image is in protective custody. Police say he was tagged in the photo but did not post it himself. “Premeditated communal violence”
Buddhists in the area, in south-east Bangladesh, said their possessions were stolen before their homes were destroyed…


Why is this? Why are those Muslims so angry all the time, and why is it the so-called “moderate” Muslims never seem to denounce their radical brethren?

Oh sure, they “condemn” violence, and they “abhor” extremism, and they consider militant Muslims’ “behavior” to be “unacceptable”, but how hard is it to simply say, “I denounce these radical Muslims”. But since the most of the Muslims do not try to calm the situation down, and guide this few angry and insane traitors, we must not wonder, that most of  the westerners will put all the Muslims into the same basket as the extremists.